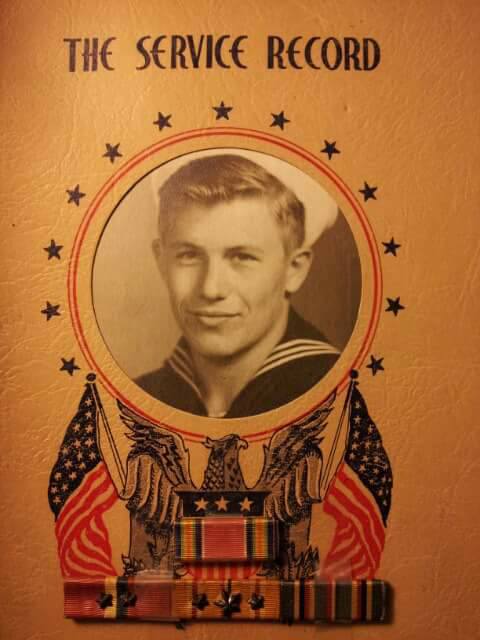 Today is Veterans Day, and while my husband was in the Air Force and my younger brother served in the Navy, the first veteran in my life was my grandpa, Tom Sheaffer.

He served as a Radioman on the USS Cowpens during World War II. Growing up, I never heard him speak much about his service. I saw his old Navy photographs. He mentioned a deep loathing for Spam because of his Navy days. There were other snippets of information here and there that he shared with us. But I don’t remember any specific stories. Maybe I should have asked.

After his passing, we heard from one of his shipmates. He was a good friend of Grandpa’s during the war, and he had kept a journal of his experience. Grandpa was mentioned in it. (There were photos of him, even.) He had copies of his journal printed out for his family, and he also shared it with us. It’s the only insight I have into what his experience might have been like. That journal is a gift. I will treasure it always.

Those veterans in your life? Ask them for their stories. Some may not want to tell their stories, and that’s okay. We have to respect what they went through and what they still carry. But if they want to talk, be there to listen. These stories are their legacy, they’re OUR history, and they’re important.

I’ll share this story from Art Daly, my grandfather’s shipmate, who shared his wartime journal with us. This is his account of a typhoon that hit the Cowpens (exactly as written without edits), and it mentions Grandpa. I never heard Grandpa mention this!

Our ship and task force are all beat up. We were smashed by a typhoon the last two days. All men not on duty were ordered to lock themselves in their bunks. Ships were in danger of crashing into each other.

We almost hit a destroyer that cut across our bow. Cowpens and San Jacinto were in danger of colliding.

Our propellers would be out of the water and would almost shake the ship apart. The stern took a beating. On the 17th I was on duty in the radio shack. We had everything tied down. Even our chairs were tied to the deck. Some broke loose. Things were flying through the air. At times we listed 45 degrees and we thought we would turn over.

Up on top waves crashed through the steel rollers on the hangar deck. Water poured in. A fire broke out on the flight deck as one of our planes broke loose and crashed into the catwalk. One of our 20 mm guns was smashed as we rolled in the sea.

Waves were coming over the flight deck. The wind was reported to be as high as 124 knots (a knot is approximately 1.15 miles per hour). Waves were reported as high as 70 feet from trough to crest. The barometer was recorded as low as 27”.

We lost our radar and was guided by the destroyer Halsey Powell by radio. I watched a lot of the storm from the top of the bridge. Destroyers would plow right through towering waves and out the other side, knocking their smoke stack right off them. The big carriers and battleships were tossed about.

I was supposed to be tied to my bunk when not on watch, but I just had to get topside. I did help with securing some planes.

During the height of the storm, we lost our air group commander over the side. He was on the flight deck trying to save his planes. He had been shot down in June 1944, was rescued, and sent back to the States. He came out again as ship’s air officer. This time he didn’t make it.

Tom Sheaffer told me that during the storm, he grabbed an overhead pipe and was flush with the ceiling. During the storm, we lost the destroyers Hull, Spenser, and Monohan.

One thought on “Ask for their stories”